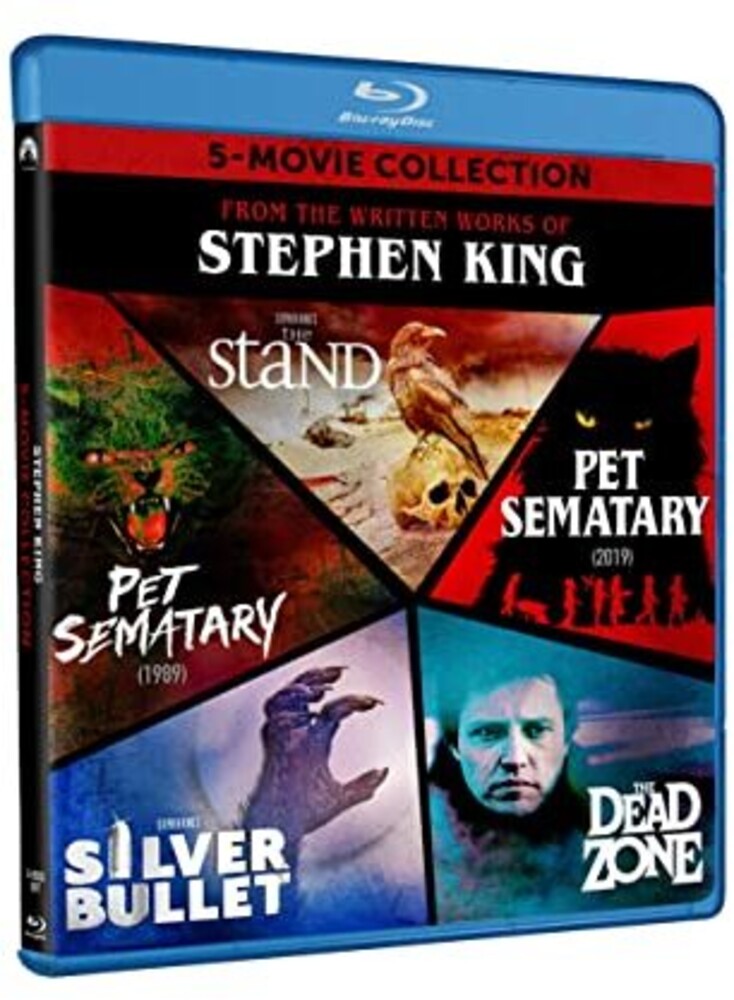 Five-disc set includes: The Dead Zone (1983)David Cronenberg directs this suspenser from Stephen King's novel about Johnny Smith, a schoolteacher (Christopher Walken) who awakens from a five-year coma to discover he has the ability to see a person's future simply by coming into physical contact with him or her. When Smith is recruited to help the police solve a murder, the horrific psychic visions he experiences make him wonder if his new abilities are a gift or a curse. Brooke Adams, Tom Skerritt, Herbert Lom, and Martin Sheen star. 103 min. C/Rtg: R Silver Bullet (1985)Based on the Stephen King novella "Cycle of the Werewolf," this intense chiller concerns a small town with a hairy problem. When the residents of the community of Tarker's Mill, Maine, become terrorized by a werewolf, a paralytic boy (Corey Haim), his older sister (Megan Follows), and their uncle (Gary Busey) are forced to try to stop the beast at all costs. Everett McGill, Robin Groves, and Terry O'Quinn also star. 94 min. C/Rtg: R Pet Sematary (1989)Spirits moan among the tombstones as Stephen King adapts his own best-seller about a mysterious Indian burial ground with resurrective powers. After the graveyard brings the Creeds' cat back from the dead, the family patriarch hopes it will do the same for his recently deceased son. But when the boy returns as a bloodthirsty murderer, it's up to dad to stop his reign of terror. Dale Midkiff, Denise Crosby, Brad Greenquist, and Fred Gwynne star. 103 min. C/Rtg: R The Stand (1994)The end of the world is just the beginning in the stunning miniseries based on Stephen King's apocalyptic bestseller. A biowarfare experiment goes awry, wiping out nearly all of the world's population, and the remaining survivors are drawn by unknown forces towards the ultimate showdown between the powers of good and evil. Gary Sinise, Molly Ringwald, Jamey Sheridan, Laura San Giacomo, Rob Lowe star. 6 hrs. C/Rtg: NR Pet Sematary (2019)Boston doctor Louis Creed (Jason Clarke) had been having the standard difficulties moving practice, wife Rachel (Amy Seimetz), and kids to rural Maine. However, when the beloved cat of daughter Ellie (Jeté Laurence) is killed in traffic, eccentric new neighbor Jud (John Lithgow) tips him to the uncanny restorative properties of a local Indian burial ground... and starts a string of unholy consequences. Disquieting do-over of the Stephen King shocker co-stars Obssa Ahmed, Maria Herrera. 101 min. C/Rtg: R