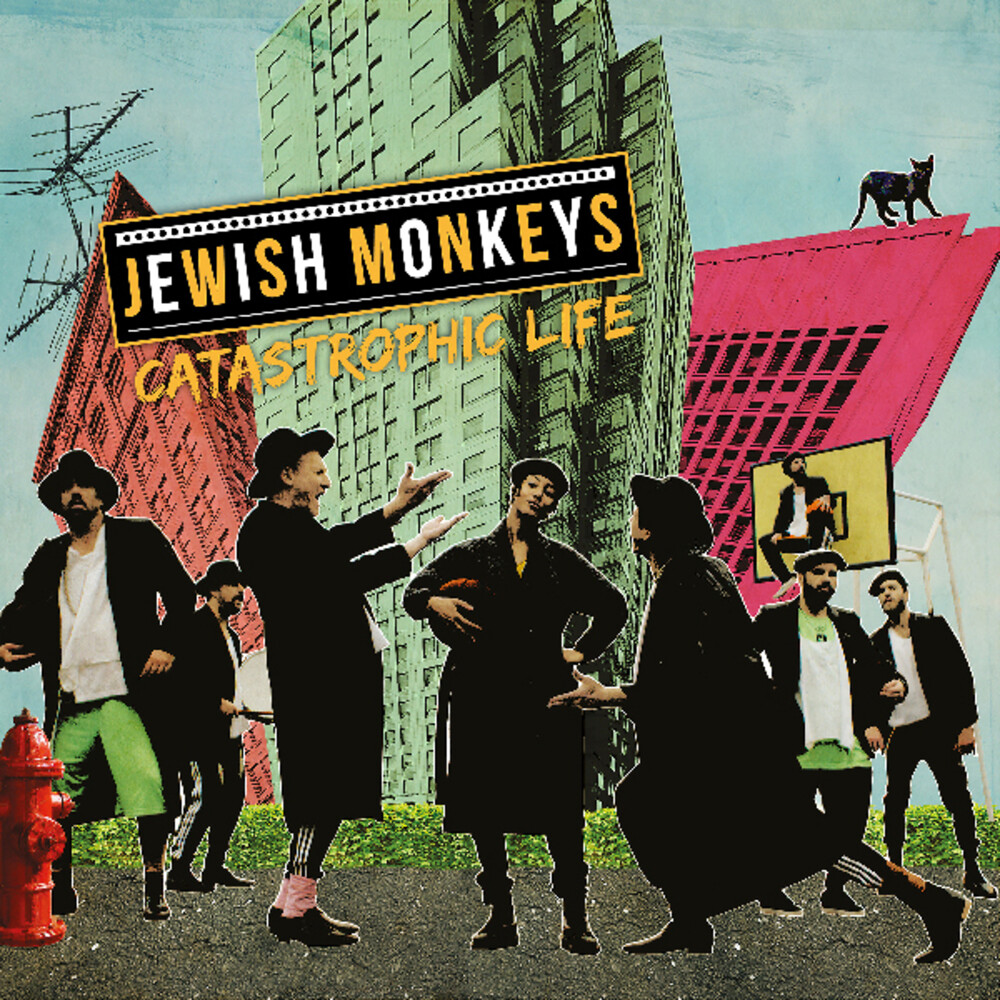 LP version. After Mania Regressia (2014) and High Words (2017), Tel Aviv's grandfathers of punk are back to present their latest album Catastrophic Life. Grandfathers of punk?! Not all band members will agree. In fact, several talented young bloods joined the ranks of the Jewish Monkeys over the past years, flashing polyphonic brass and shredding guitar riffs to keep the old guys on their heels. The ten new album tracks were all written by the band itself and see the expedition venturing into unfamiliar territory. Fans have become well aware that popular shtetl tunes blended well with ska rhythms. This time however, they up the dosage, adding Afrobeat, reggae, and funk licks, Caribbean flair, wild guitars as well as a pinch of Balkan sauce to the driving mix. While their biting, satirical verses are quick to rub salt in the wound, the Monkeys are equally prone to address their own inadequacies as they come to terms with old age, impotence, lying politicians, and the incessantly rising temperatures on planet Earth. Social criticism is simply part of the game as is Jewish humor and a knack for emphasizing one's personal shortcomings: Indeed, it is a Catastrophic Life for all those hopelessly married forever, claims a song from the album, but there's always hope. For "All the Great Things" always happen when you're least expecting them, and in the end, it's all just one "Grand Bazar", a grand mix of cultures and neuralgic points. We're living in a "Robot Age" as submissive victims to the algorithms. We'd be hopelessly lost, were it not for the one they call "My Jewish Girl". And finally, "Punkfurt" takes things back to the city where it all began: Frankfurt. One of their notorious performances was even documented by German public television (ARD). During their regular tours of Germany, the Jewish Monkeys were readily welcomed by audiences who showed great interest in their musical potpourri of Eastern European descent. Let's not ignore the fact that German audiences in particular have a lot to swallow, when faced with the band's relentlessly open-minded and provocative lyrics, but usually break into relieved laughter just moments later. German Hi-Fi magazine Audio put it this way: "The Jewish Monkeys demand listeners leave their sentiments at the door. This Tel Aviv-based outfit employs an aggressive mix of cabaret, circus marches, Frank Zappa-ish horseplay and klezmer punk to shock it's audiences; Jews and Gentiles alike!"