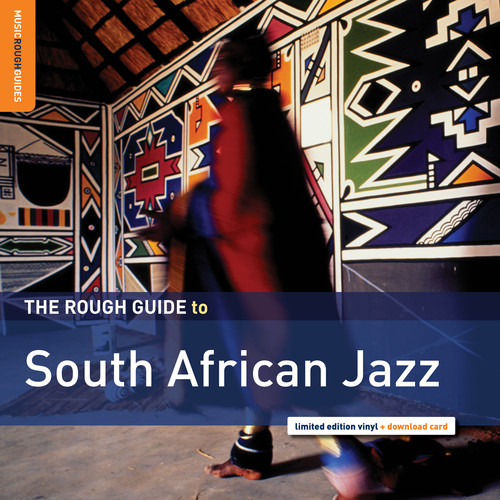 Encompassing the marabi, kwela and jive styles of mid-twentieth century urban South African music, this compilation covers the sounds, styles, assemblages and musicians that reside under the umbrella of South African jazz – from the golden age of 1960s and 1970s to the new wave of musicians in the twenty years of post-apartheid democracy. Recently re-issued releases from musician-in-exile Ndikho Xaba demonstrate the strong transatlantic dialogue between the civil rights movements in the USA and the anti-apartheid struggle through the language of jazz, with the rare single ‘KwaBulawayo’ as performed by his group The African Echoes. The Sowetan spiritual Afro-jazz of Batsumi on the track ‘Emampndweni’ contributes to the narrative of music at home during the height of apartheid in the 1970s and similarly slots into the category of undeservedly lesser-known artistry. From a period considered by some as the golden era of South African Jazz, these artists and their compositions are pertinent and vital reminders of the intrinsic link between this music and the dismantling of oppression. One of the most prominent figures of the South African jazz movement is the composer and pianist Abdullah Ibrahim, whose career spans over 50 years, including a performance at Nelson Mandela’s 1994 Presidential inauguration. Having played alongside Abdullah Ibrahim, the late Zim Ngqawana was a leading proponent of the exploration of free improvisation. While retaining South African jazz roots, Ngqawana incorporates traditional and avant-garde elements in his performances. This is prominently illustrated with the rasping vocals and volatile harmonica on the track ‘Ebhofolo’. Gospel, hip-hop and electronic music now dominate mainstream music in South Africa. But against this backdrop, the new school of South African jazzers have embraced the diversity of musical output, with many making the crossover themselves. Bokani Dyer regularly performs with fellow band member and bassist Shane Cooper, in his electronic music alias Card On Spokes. Furthermore, it could be argued the trajectory of popular music in South Africa over the last twenty years is personified by Thandiswa Mazwai, who rose to prominence through her work with kwaito group Bongo Maffin in the mid-1990s, before going on to encompass gospel and delve into maskanda and electronic music in her solo career. Featured here is Thandiswa’s take on the South African Jazz standard ‘Ntyilo Ntyilo’. South African jazz may now sit on the fringes of popular culture in South Africa, but you only have to look at the success of the Cape Town International Jazz Festival, Joy Of Jazz Festival in Johannesburg and the National Youth Jazz Festival to recognise the legacy of the pioneering musicians and the continuation of their collaborative spirit in the wealth of burgeoning jazz talent in South Africa.