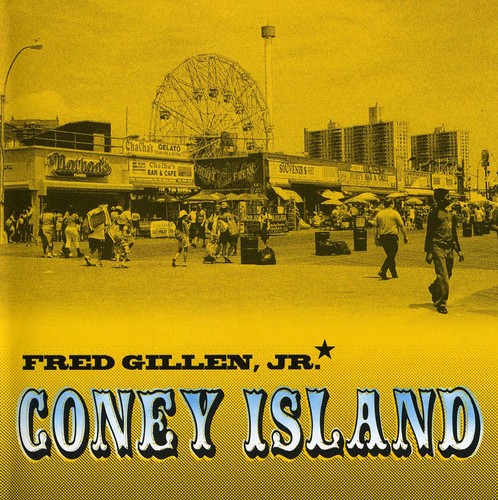 Liner notes: A whole lot of memories can pile up in a place or a person, until a weight hangs in the air like haze in the summer sky. To clearly see the vivid colors of the present, some of the curtain needs to be pulled away, and in order to move it you need to get close enough to feel it's velvet weight in your hands. Close enough to see the intricate weave of it's fabric as you push it gently aside. The colors, sounds, and smells of Coney Island are dazzling when experienced with an open heart, clear of memory's dull, mourning drapery. About the production: This record explores some new territory for me, production-wise. Though I brought finished songs into the recording room, unlike most of my past records these songs weren't recorded live in the studio around my acoustic guitar and voice. The producer Koji would make a drum or rhythm loop and I'd play along. Then he'd mess with it to get it more or less in the ballpark of the song. Oftentimes he'd put a loop up and it would be way too fast or slow or something, and I'd say 'hey, let's try the song like this...' So the rhythm would dictate where the song wound up. I love many artists who work this way as a habit. Peter Gabriel comes to mind in fact. So though the songs are still folky and still feature the acoustic guitar they also have different grooves then anything I've done before. What a fun thing it was to work in a totally different way then I'd ever worked before. I hope you like it! About the songs: Many of these songs have been audience favorites, such as Devil's Bluff, Witness, and Elliott, and others are pretty new such as Eleanor, Dying Gasp, and Listen. I think in these lyrics I've touched on some spiritual and human things that I've always been trying to speak about in my songs. I think listening to Elliott Smith obviously influenced this one a lot, but also many things I was reading such as William Blake and John Steinbeck, and what I was going through in my life. The time in which I've made this CD has been a time of great spiritual growth and hope for the future for me and I think that is reflected in these songs. Review by Skott Freedman From Indie-Music.com, July 12, 2008: On his eighth solo release, Coney Island, singer-songwriter Fred Gillen, Jr. delivers a respectable collection of folk-rock tunes surrounding themes of love and adventure. The title track does a fine job of pulling the listener in as ethereal reverb-laced vocals promise an album of something original, not just another bland cookie from the singer-songwriter bakery. Gillen effortlessly lulls the listener along with the poignant 'This is a dangerous place to fall in love' as he weaves in a story about the wandering ghost of Woody Guthrie. 'Elliott,' a touching tribute to the late Elliott Smith, is a surprisingly vulnerable track from Gillen and offers yet another side to the troubadour. Throughout the strangely appropriate upbeat song, Gillen maintains a fine balance between a dedication and a sappy tribute. It's his lyrics indeed that carry much of the album, straying from cryptically emo lyrics too often pervading the indie music scene. Gillen's lyrical style is both refreshing and unique while remaining accessible to the listener. On the electronica-tinted 'Censor the Wind' (sure to keep you listening from start to end on the first listen) Gillen proves his voice is capable of crossing genres. It was a gutsy move (Gillen tried the same electronica approach on 'Gone,' which didn't succeed) but I applaud Gillen for pushing his usual boundaries. Still, it seems Gillen shines most on the more simpler arrangements like on the final track, 'Eleanor,' where his voice remains at the forefront. At times I hear a little Glen Phillips (Toad the Wet Sprocket) creeping in, strong but never forced. On Coney Island, Gillen continues to assert his stance among contemporary singer-songwriters that he will surely be producing new and exciting music in years to come.