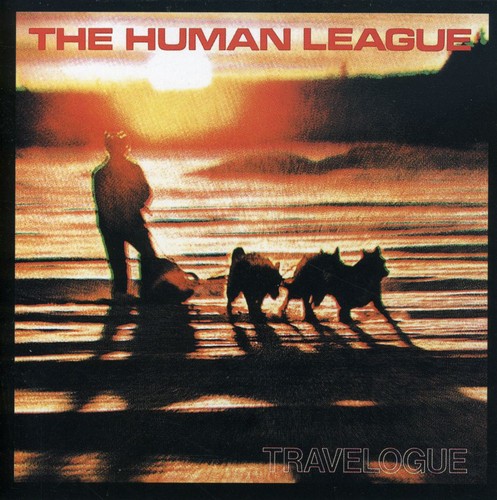 The Human League's second album, 'Travelogue', was also the last to feature the nearly original lineup of Martyn Ware, Ian Marsh, Philip Oakey, and Adrian Wright. The conflicting musical directions led to a split in the band after this album, which causes an interesting contrast throughout. "The Black Hit Of Space" fuses the League's broad sci-fi obsessions with an inventive and probing electronic backdrop, or alternating the strident synth-pop of "The Touchables" are great examples. There is enough energy, melody, and sheer pop flair on 'Travelogue' to qualify this record as a superior advance on into the field of straight-up electronic pop.

''Travelogue'' is the second full-length studio album released by the British synthpop band The Human League.

Released in May 1980, the band had yet to achieve any degree of commercial success. For ''Travelogue'', the band worked with a new producer, Richard Mainwaring, who went on to produce OMD's platinum selling ''Architecture & Morality'' the following year. ''Travelogue'' entered the UK album chart at #16, which was also its chart peak, and remained on the chart for 9 weeks in 1980. Although a vast improvement on their debut album, ''Reproduction'', which had failed to chart at all the year before, the lack of high success precipitated the departure of founding band members Martyn Ware and Ian Craig Marsh, who went on to form Heaven 17. Their departure led to remaining members Phil Oakey and Adrian Wright moving The Human League in a new musical direction with a new line-up. As the new band then began to make a commercial impact the following year, ''Travelogue'' re-entered the chart in August 1981 for a further 33 weeks, eventually being certified Gold by the BPI in May 1982.

Two songs were released as singles from the album; a new version of the band's first single, "Being Boiled" (as part of the ''Holiday '80'' EP released a month before the album), and a cover of Mick Ronson's "Only After Dark" (which was ultimately given away as a free single with a re-issue of the band's 1979 single "Empire State Human" in June 1980). Neither of these were successful, though "Being Boiled" would be re-issued once again in early 1982 when it finally became a top 10 hit. The album also featured a cover of the famed advertising jingle for Gordon's Gin, written by Jeff Wayne.

Virgin Records remastered and re-issued ''Travelogue'' on CD in 1988, with an expanded track listing which included the ''Holiday '80'' EP, the disco single "I Don't Depend on You" (originally released under the moniker "The Men"), and the single "Boys and Girls", which had been produced by Oakey and Wright after the line-up split.

The Canadian issue of Travelogue was released in a different sleeve, similar to the Holiday '80 front cover, and the tracklisting also differed:

The Voice Of Buddha (the re-recorded version of Being Boiled under a different name), The Black Hit Of Space, Only After Dark, Life Kills, Dreams Of Leaving b/w Crow And A Baby, The Touchables, Gordon's Gin, Rock 'N' Roll/Night Clubbing, WXJL Tonight.

Similarly, the Australian issue also featured a different tracklisting, though the original sleeve and song titles were retained for this release: