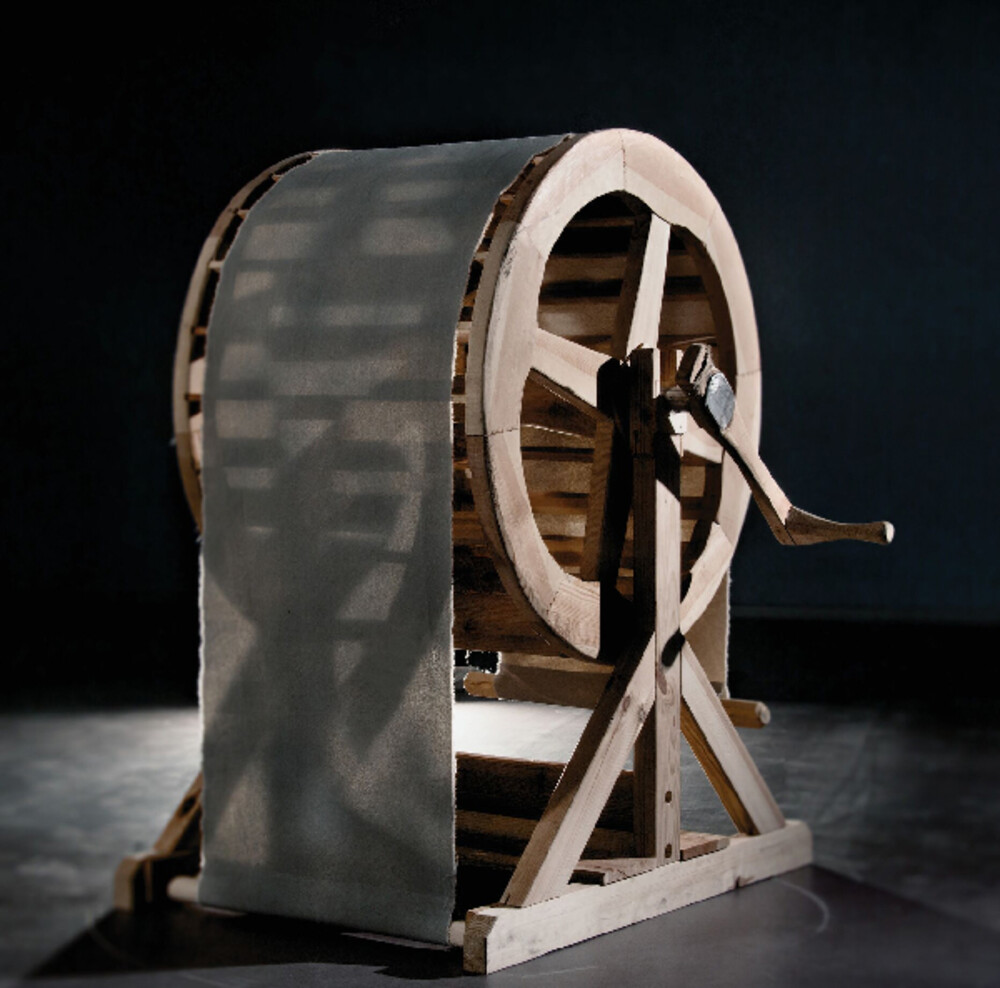 Bad Weather Long Play is a performative sound art event of a group of performers engaging with reconstructions of Baroque theater noise machines. The project started in 2017 when Lithuanian artist Arturas Bumsteinas teamed up with theater carpenter Ernestas Volodzka to re-create wind, rain, sea, and thunder imitation devices, identical to the ones whose canon settled in European theater in the 17th century. Commissioned and produced by contemporary music theater production house Operomanija, "Bad Weather" events have since been presented in Lithuania and Poland. During each performance, the ensemble plays the machines in keeping with meteorological maps and charts from various centuries that serve as scores. Contemporary artist Ivan Cheng was invited to write and perform a libretto that is integrated into every performance in different ways. In the Baroque era, the noise machines constituted only a small part of the theatrical illusion, lurking behind the scenes, invisible to the audience. Meanwhile in Bad Weather Long Play, they take the spotlight and become generators of conceptual climate. Bad Weather Long Play is a collage of sound materials from performances, rehearsals, soundchecks, and other occasions related to the project, as documented with various recording devices between 2017 and 2019. The sides of the LP don't function as A and B sides but can be played in any order. Co-release with Operomanija; full-color sleeve with printed inner containing photos of the project and liners by SalomĂ© Voegelin and eight-page booklet reproducing Ivan Cheng's libretto. Arturas Bumsteinas (b. 1982 in Vilnius, Lithuania) is an artist working within the intersections of sound, music and art. His practices include performative sound art, radio art, exhibitions, experimental acoustic and electronic music. He started exploring theater noise machines in 2012 when he was commissioned by Deutschlandradio Kultur to compose Epiloghi. Six Ways of Saying Zangtumbtumb. "Produced from a selection of recordings made at rehearsals, workshops and performances with an alternating team of seven performers, Bumsteinas convokes a work that sounds it's process on the mobile blueprint of meteorological maps as scores. Creating a mis-en-scĂ¨ne of invisible occurrences that talk with each other in the language of a storm that is brewing, raising and petering out, and that leaves a trace in our ears, an imprint and a movement that might only clear the next day. " -from the liner notes by SalomĂ© Voegelin.