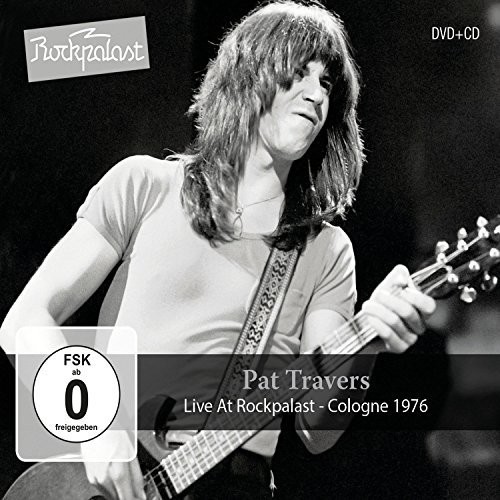 Pat Travers - Live At Rockpalast: Cologne 1976 - On November 4, 1976, a young guitarist and singer performed with his band at Rockpalast, is not only delivering a sensational show but also giving definite proof of a musical potential yet to be fulfilled. Almost four decades later, these recordings were finally unearthed and are officially available. Travers played together with bass player Peter Mars Cowling and drummer Nicko McBrain, the same Nicko McBrain that pounds the skins for Iron Maiden. I first saw Nicko play with his band Street Walker, Travers recalls. They were about to split up, and I caught one of their last shows. Nicko's fiery, funky and energetic drumming style really impressed me. The trio's trip to Cologne itself was one to remember as well: We used a small plane, a Beechcraft King Air. When descending the air pressure increased too quickly, so we all had sore ears and sinuses for a while right up until the show. Also the setup for the gig at Rockpalast seemed a bit underwhelming at first: The vocal monitor speakers on stage were very small and not sufficient at all, Travers recalls smiling, overlooking the fact that the aforementioned sore ears possibly were also responsible for this impression. And although there was a live audience, they were very far away from us and not really visible due to the bright stage lighting. So what we could hear was not as loud as we were used to, and interacting with the audience proved to be a challenge. Looking back on the recordings today, there's no trace of these problems, none at all. The grooves hammered out by Cowling and McBrain are simply stunning and add that special something to Travers' blues-based (in the broadest sense), yet hard rocking and modern sounds. The man himself blasts out each and every riff and solo with energy and passion as well as singing his heart out. In other words: Just these three guys are making a hell of a lot of music.